As I write this on Mother’s Day (5/11) after a week to “acclimatize” from over 5-thousand miles of road trip I realize that “the love of travel” was just another of my mom's gifts to me.


Sail, rail, bicycle and motorcycle all offer great means of “getting out of Dodge” and each has many plusses and minuses. But having my 14-foot “aquatic RV” in tow behind my 4-cylinder Honda CRV seemed almost perfect for me (alone - but without the good company of Dan and Steve, the trip would not have been half as much fun and enjoyable).


I would have liked to stick around another week for the big annual Cedar Key Boat Show but my great job was expecting me back.


So my solo return across the southern US along bland I-10 (once I stayed out of red neck bars : -) was pretty uneventful but it’s fun to take notice of the “finer” reminders that I’m not yet back on the “left coast” yet.


I made another stop at Bear’s in Tucson and it’s great to see his recovery going so well. The Windward Skunk has quite a history and Paul also gave me an insider’s tour of some of Tucson’s musical history and his large part of it. 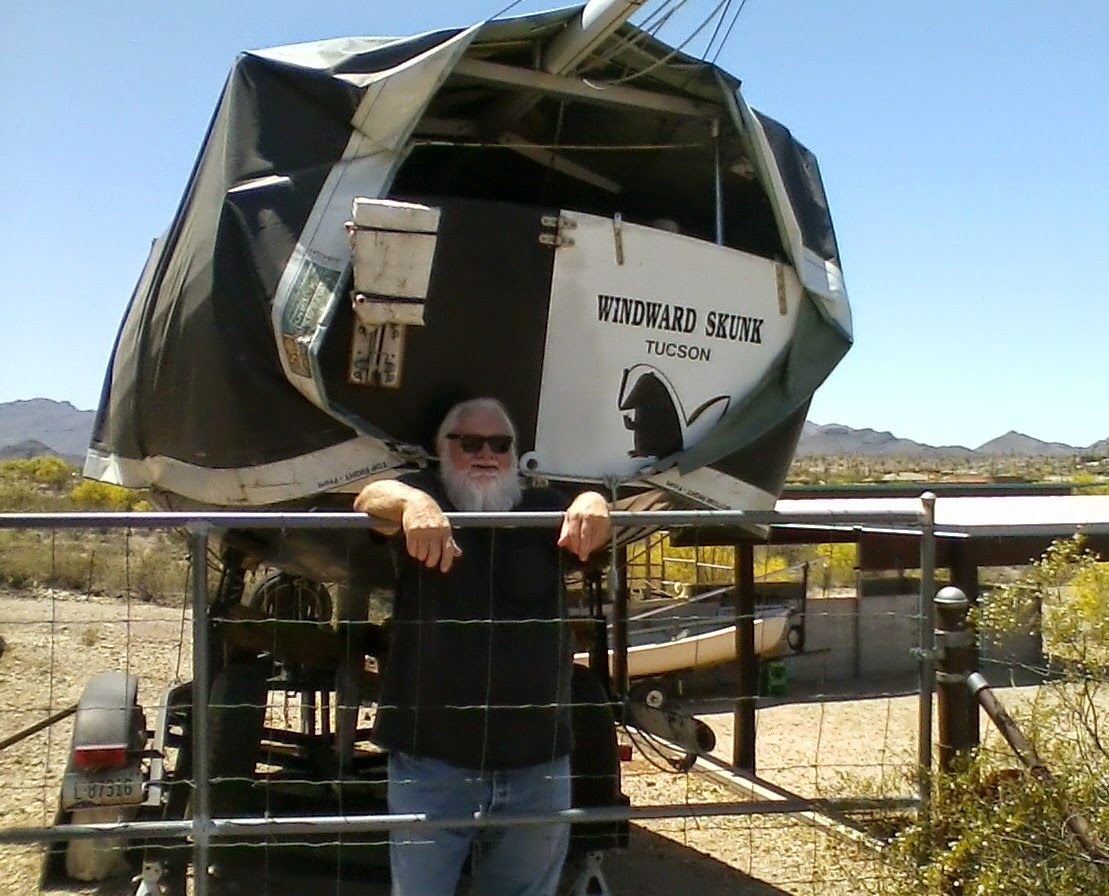 My last day of driving over ten hours was exhausting but it was good to be back home. I’d still like to post more about what worked (almost everything) and why, and also about weather, time zones, and bugs – soon.

Posted by Sunset Sailor John at 3:18 PM No comments:


As news headlines confirmed, that storm over me last night moved eastward and grew much worse, pounding the Gulf Coast with 28-inches of rain! I called Steve to check on his bayou home in Panama City; no flood damage but roof leaks over the dining room. Watered-down soup seems minor compared to the severe damage reported around Pensacola.


New Orleans is a special city to many people. My late girlfriend, Lisa, was born and raised there, her father a prominent doctor, living for many years in The French Quarter, just behind Central Grocery. Why mention a grocery store? Central Grocery makes a sandwich as unique as Nawlins itself, the Muffuletta. So, hungry and in no rush, I made the southerly detour to pick up lunch, dinner, and lunch again (it’s that big) and reflect on good times past. 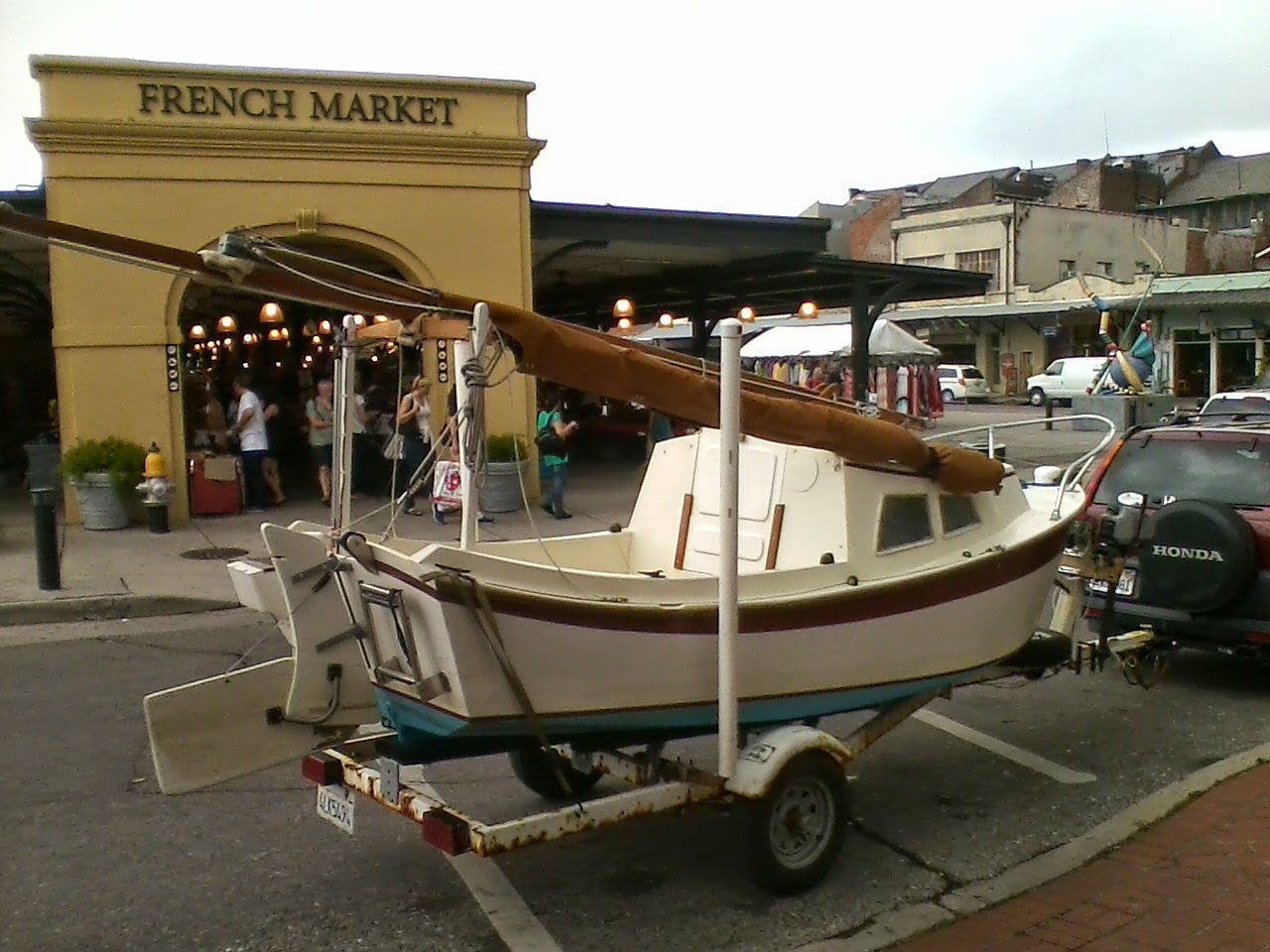 Good times in my past also include Louisiana Cajun country, shrimp ‘etoufee, and dancing to Zydeco music, so I made a point at stopping near Lafayette to find some live music. It was the same KOA that Dan and I first stayed at on our way east and I groaned then to read that one of my favorite musicians, Keith Frank, was playing a festival that weekend, but we needed to keep going.
This time I groaned to miss him playing again – next weekend! Well, Tuesday night or not I was determined to find some live music. Listed on the web for Zydeco is The Cowboy’s Saloon and all the trucks in the parking lot seemed to confirm its name. Inside was loud with not Zydeco or Cajun music but a mediocre Country band, oh well. A few Southern Comforts and Buds (tap beer? “we ain’t got none”) and they didn’t sound so bad and the rough-and-tumble, tattooed women were looking better too, especially one of the bar maids with two gold teeth – at least she had them evenly spaced. As I was the only person there in Topsiders and kaki pants and one other person with a ponytail (and she had a very big boyfriend : -) I eased on back to Hobbes.
Posted by Sunset Sailor John at 7:53 AM No comments:


After a late and leisurely farewell breakfast with Dan and Steve, Hobbes and I hit the road. I had no distance goal for the day as I gave myself an extra day travel time to get back home relaxed (I hoped).


By late afternoon I had passed Pensacola, the focal point for us meeting 28-days ago. I stopped at a rest stop and took a nap, the car running to both keep the A/C running and to give some “white noise” against the trucks idling next to me.


It was now about nine PM, I had crossed Alabama into Mississippi, and needed to stop somewhere safe for the night. Safe, tonight, meant safe from severe thunderstorms predicted, 80% for my location. Far worse was that in two days prior, 35-people (!) had been killed by tornados, some in upper Mississippi. I turned on my marine VHF radio for a weather report; “a tornado watch is in effect until 8AM for the following counties, Green and George counties of Mississippi” – George County is only 20-miles from me to the north! Just across the state line I pulled into the welcome center / rest stop and parked between a couple big rigs (would they run interference for little Hobbes?). A security guy said that every truck lane would be filled in an hour and directed me to a “better” spot; in the open with nothing taller to take lightning strikes or shelter me from the high winds that were sure to come. Frustrated and now more concerned, I drove westward on I-10 to the next rest stop near Moss Point, Ms and was relieved to find individual diagonal parking cuts just long enough for Hobbes and my car to back into. More importantly each parking cut was under substantial trees that were now swaying violently in the strong southerly wind. With Hobbes pointing northward, I lashed my “sun” tarp (white polly) as securely as I could and climbed below with the VHF radio in hand.


At about three AM I was suddenly awakened by LOUD thunder, a downpour of rain and lightning flashes closely around me – too close for my southern California nerves! I turned on the marine VHF again. Thankfully the tornado watches for George County above me were dropped but now quarter-inch hail, was warned for the Pensacola area of Florida and parts of Alabama. At least I was clear of that! With the tarp across my leaky companionway hatch (even when closed!) and my rebedding fix a few weeks back, of the forward portlight, I was mostly dry, thank goodness, (except for the three or four inches of standing water in my cabin foot well likely from unresolved mast leaks) but I managed to sleep through the receding thunder. 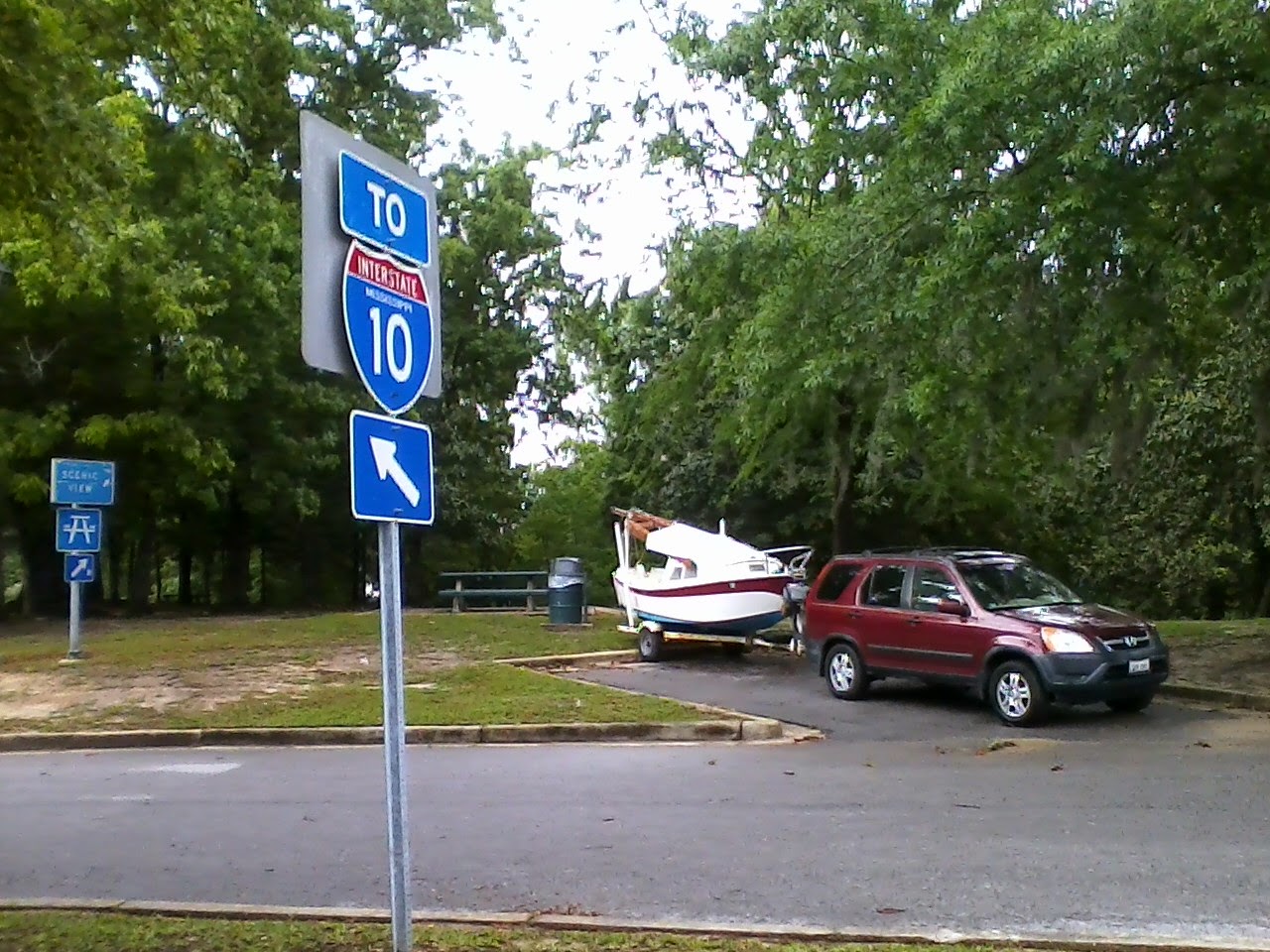 Posted by Sunset Sailor John at 9:00 AM No comments:


In April of 1864, the USS “Restless” captured a 36-foot (on deck) Confederate sailing scow near Crystal River. Gaff-rigged with weighted leeboards, they were perfect “work horses” for the shallow waters of the Gulf and a lot of the East coasts.


After three years of volunteer labor by the Crystal River Boat Builders, the replica “Crystal River” was launched last year. Nearly all of her construction was of “period materials” including nails rather than screws.


With the boat show over the remaining boaters were invited for a sail. With a 12-foot beam and engineless, she’s a challenge to maneuver, especially in the near constant river current. So a small outboard-powered tugboat is used alongside. Working way against the flood was very slow and became dicey when the outboard ran dry of gas. Even with full sail set we quickly drifted toward the grassy shore, until the fisherman anchor was dropped and we got re-fueled. Favoring progress over the ground we came about and ran down wind and when the skipper asked if anyone wanted the helm I was aft in a flash. I sailed boats up to 110-feet so handling the Crystal River wasn’t a surprise, except for calling for the weighted leeboards; dropping the lee board and having the windward board hefted up with block and tackle (the only winch aboard was for the anchor). I love it when I can focus well enough to run wing and wing, without a whisker pole, but the block and tackle barn-door rudder got me a couple of times for an unintentional jibe (oops). When we reached the turning basin much later we got her broad reaching to 6-knots, a record so far, this only being her fifth time out since her build! I been feeling bummed that this was my last day before having to head home but the day’s sail was a perfect finale and I give a big thanks to skipper Steve Kingery, we even saw a group of about eight manatees. 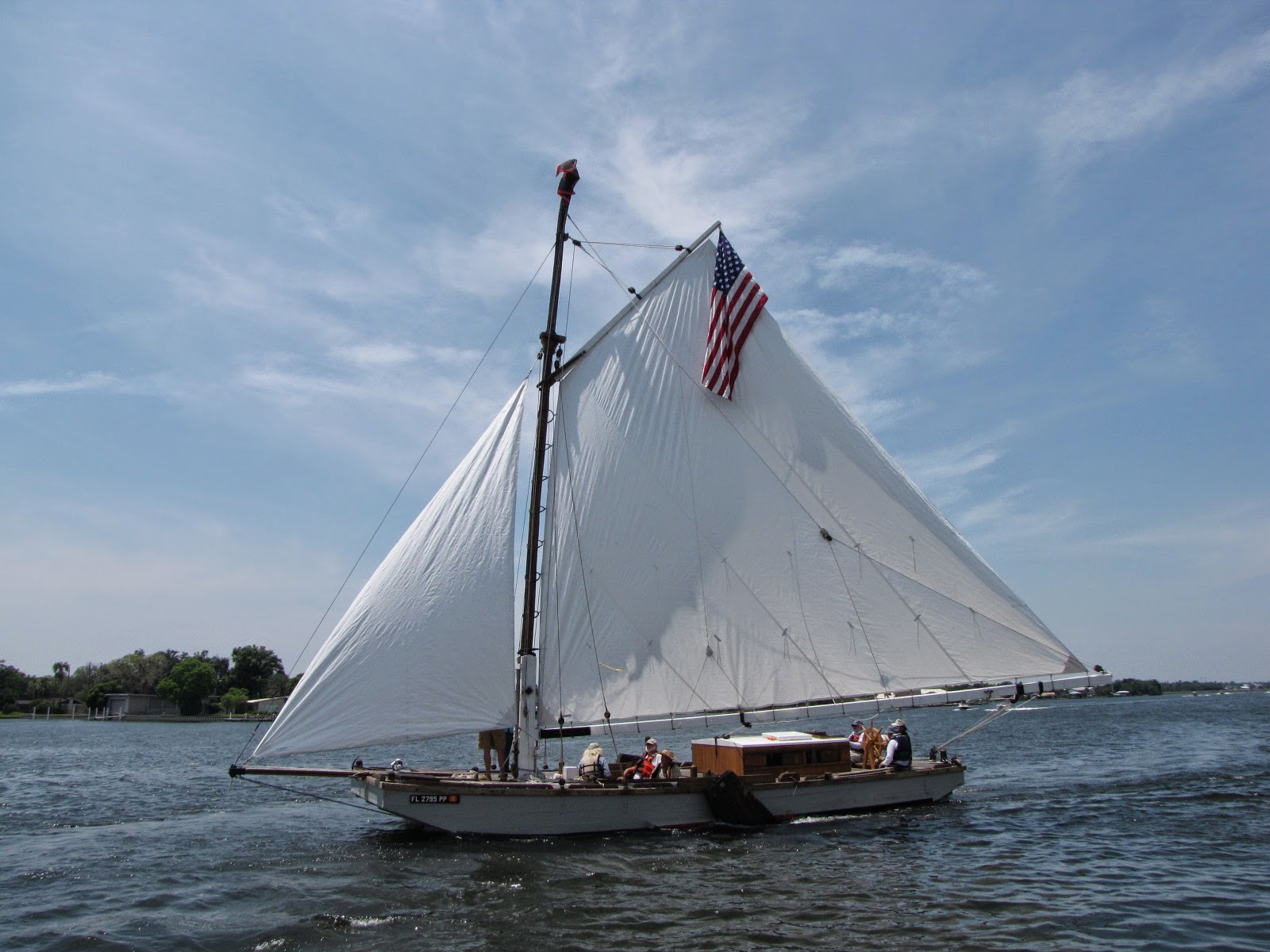 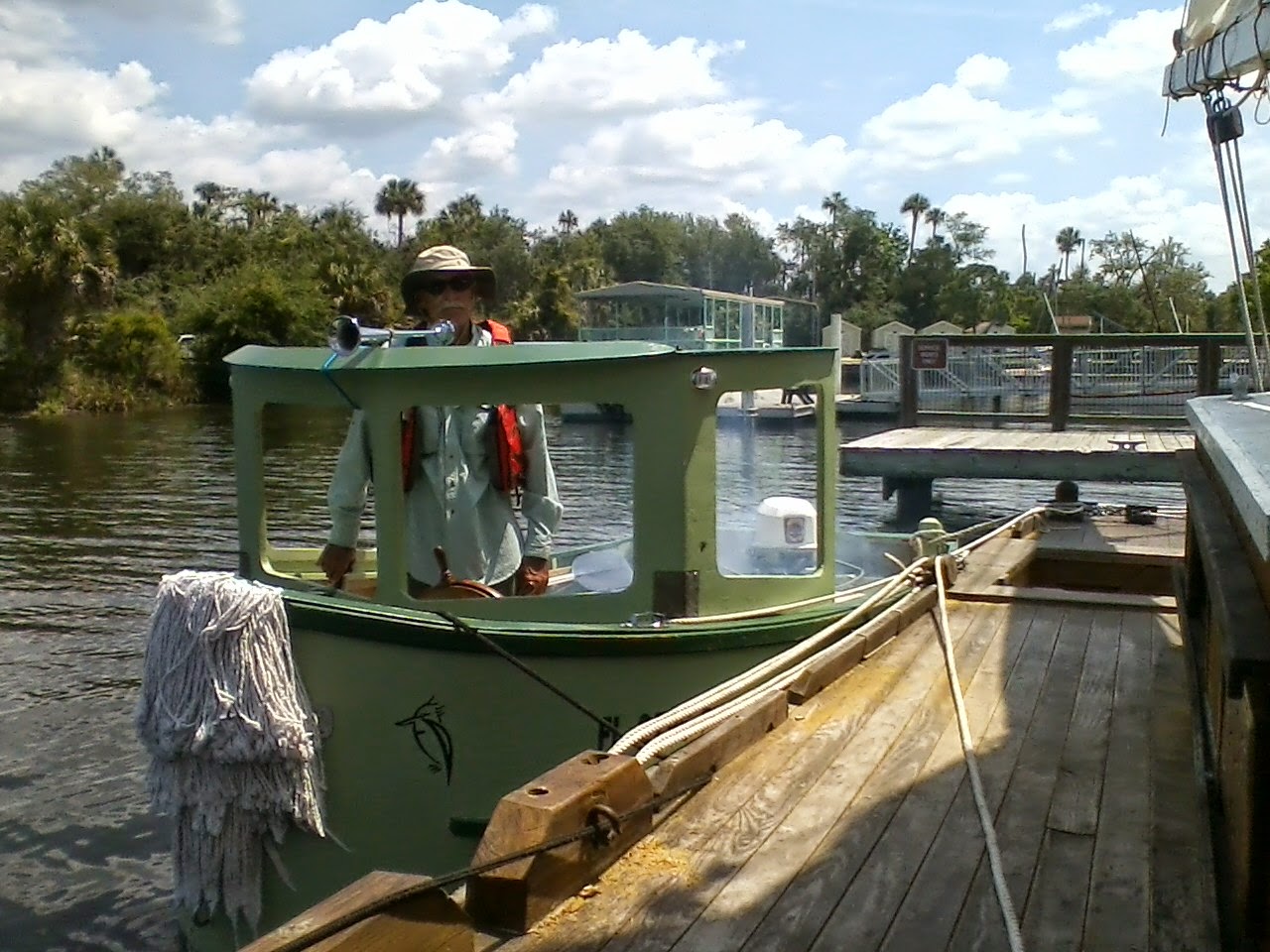 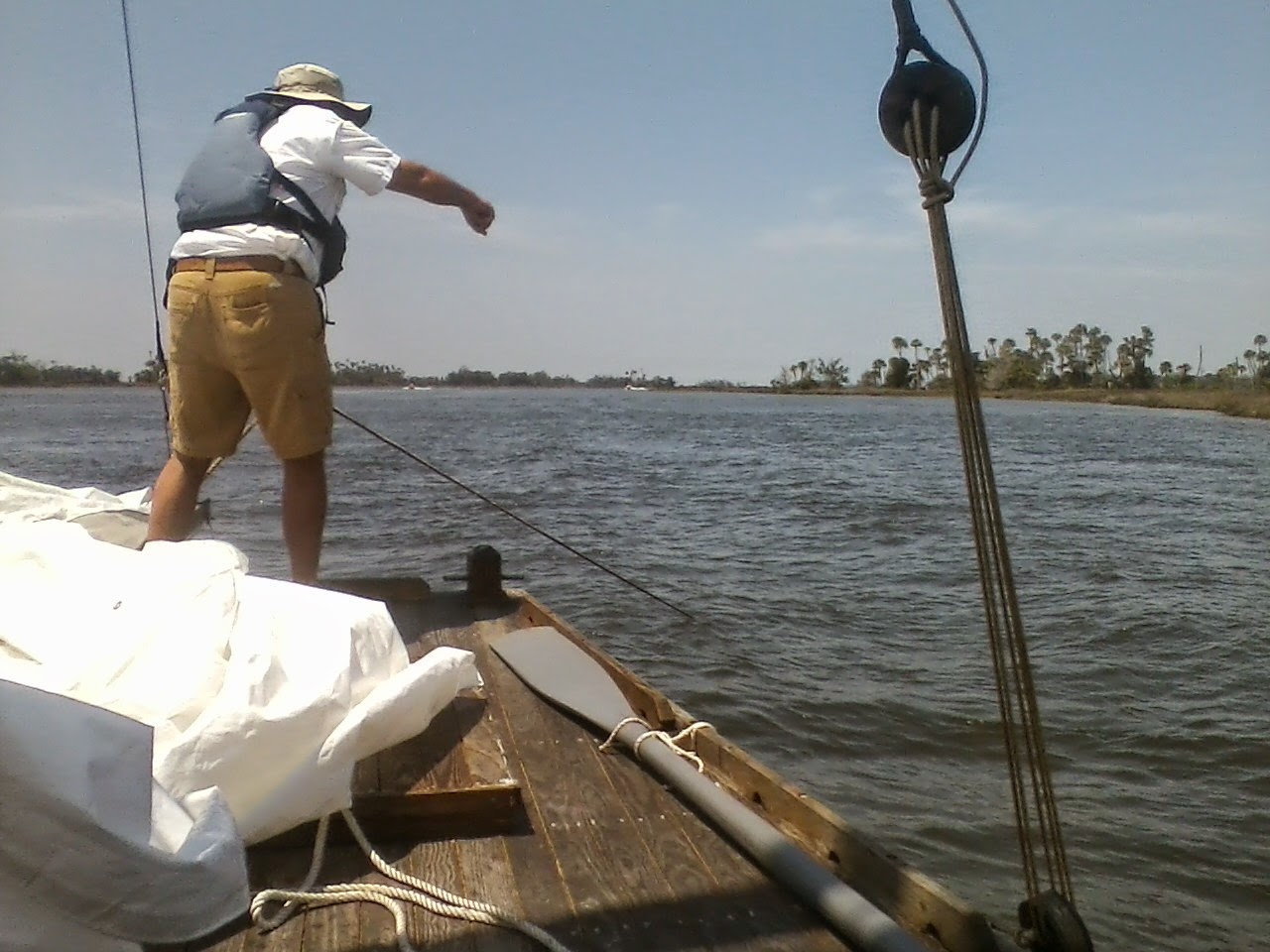 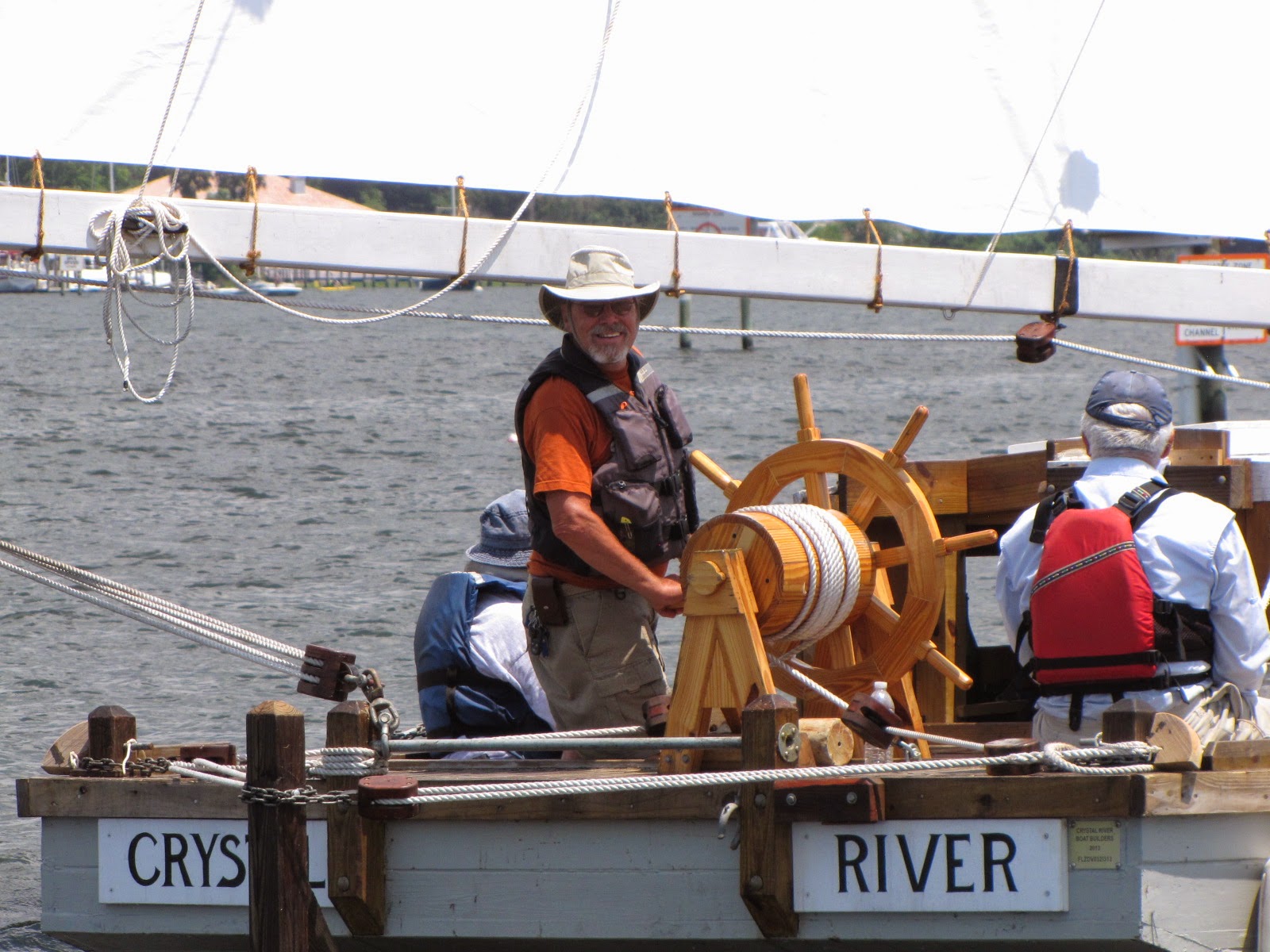 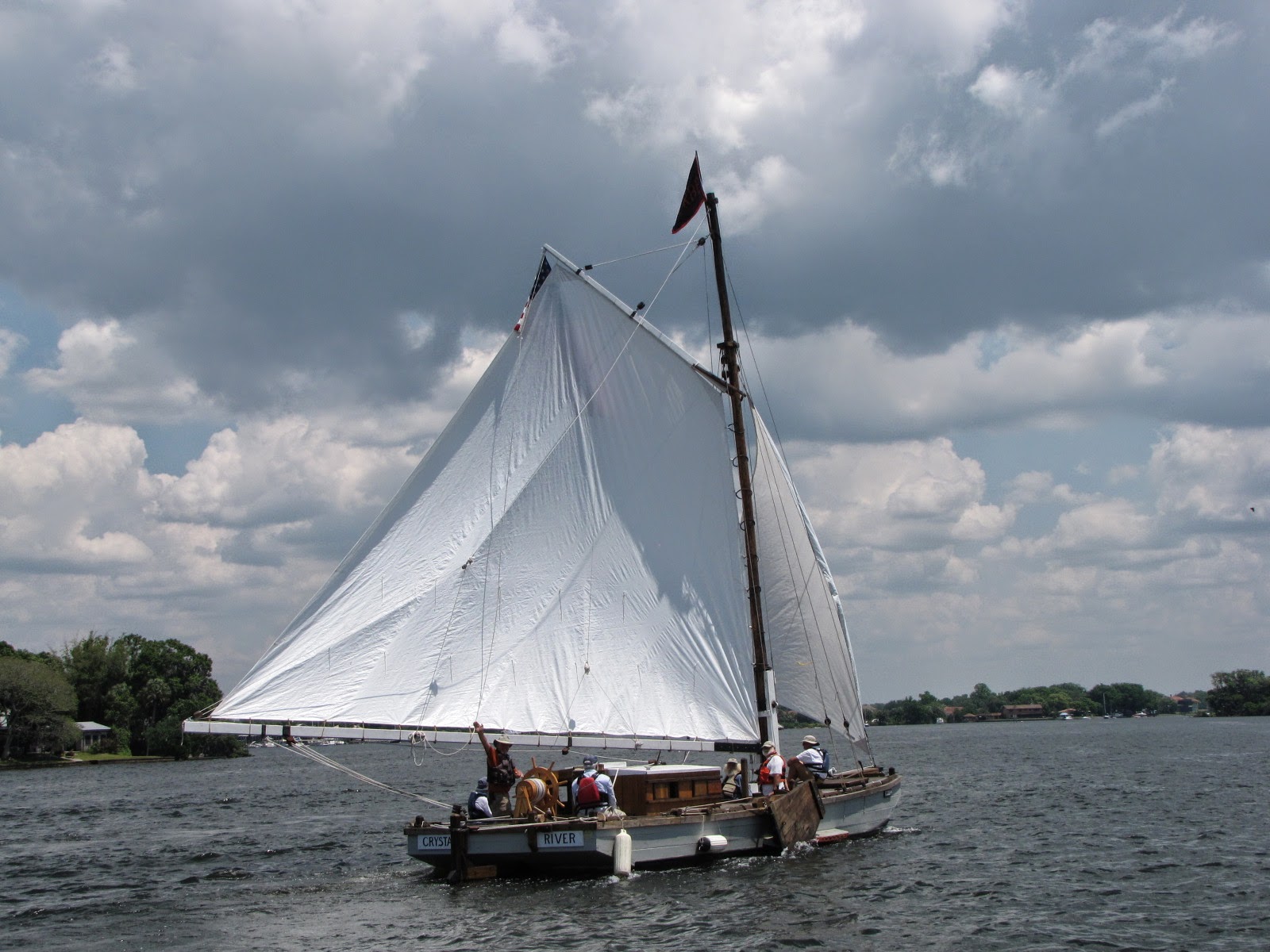 Posted by Sunset Sailor John at 8:57 AM No comments: Several more boats arrived before the public opening at 10AM and I enjoyed the wide variety and skilled craftsmanship displayed. There was also a civil war encampment, a pottery making display, and lots of live music. 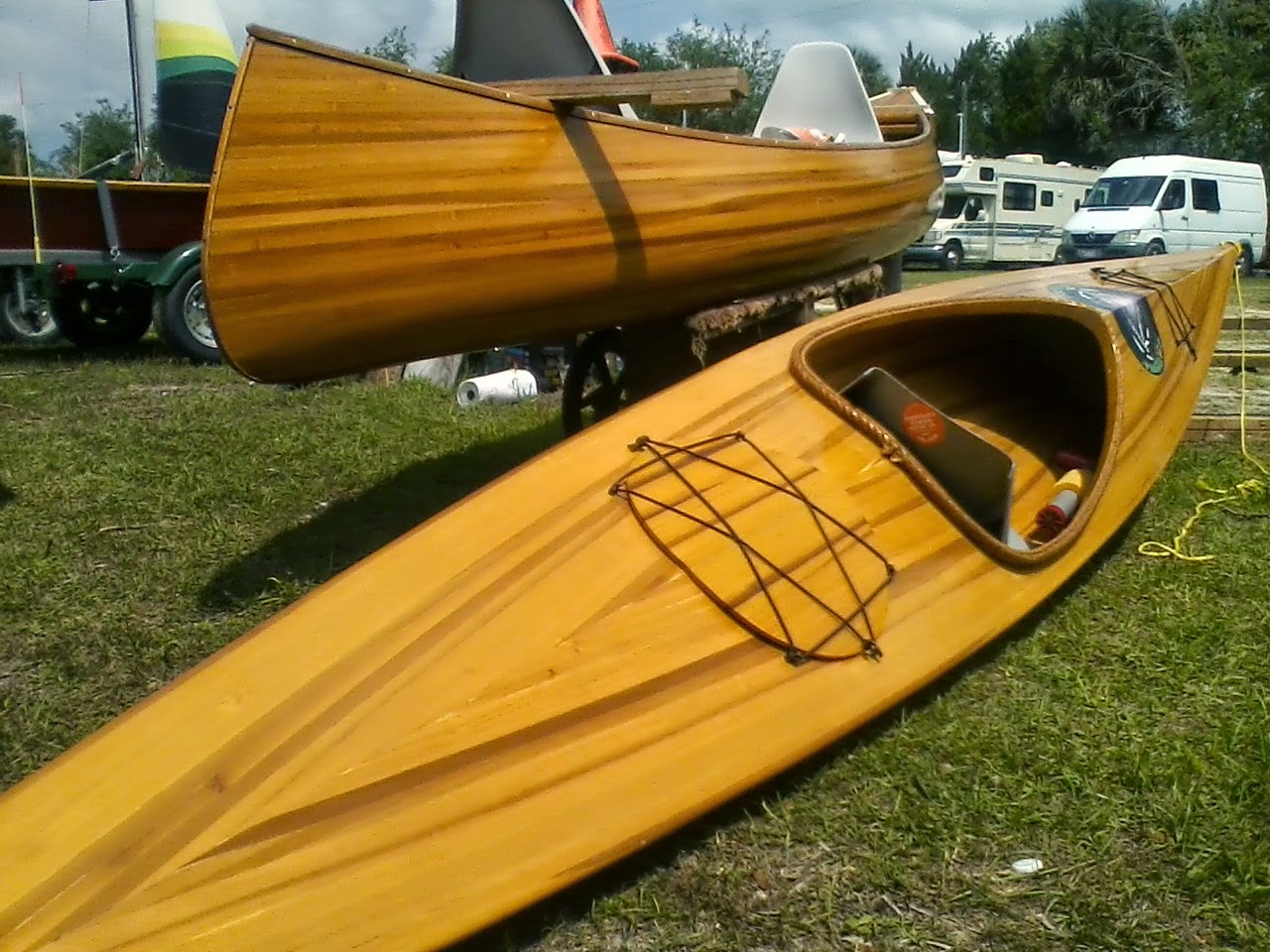 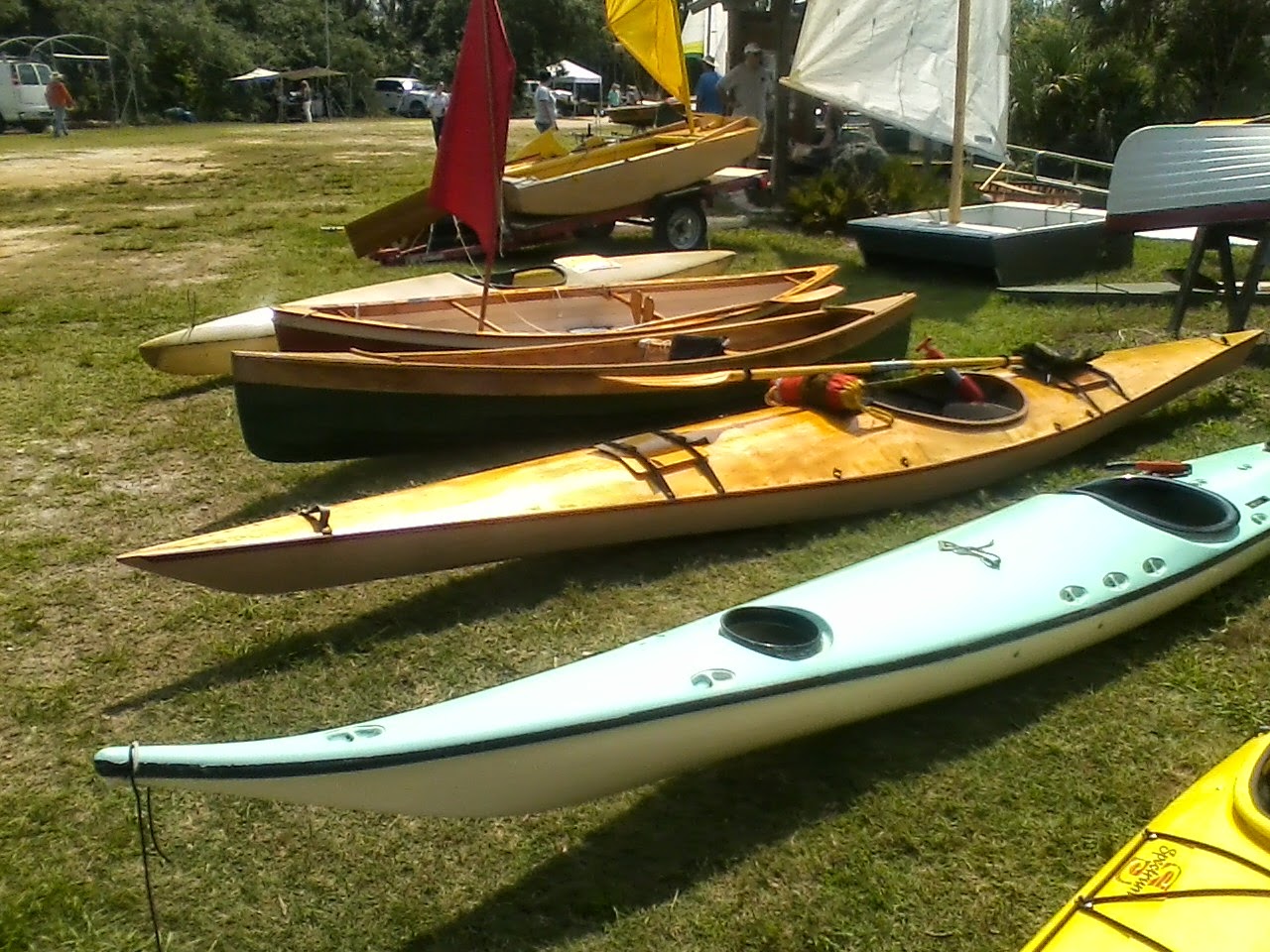 Posted by Sunset Sailor John at 7:30 AM No comments:

﻿
﻿
﻿
Friday 4/25/14
I hated to leave Cedar Keys but after a simple breakfast in paradise I sailed back to the launch ramp near the “downtown” waterfront.
﻿ 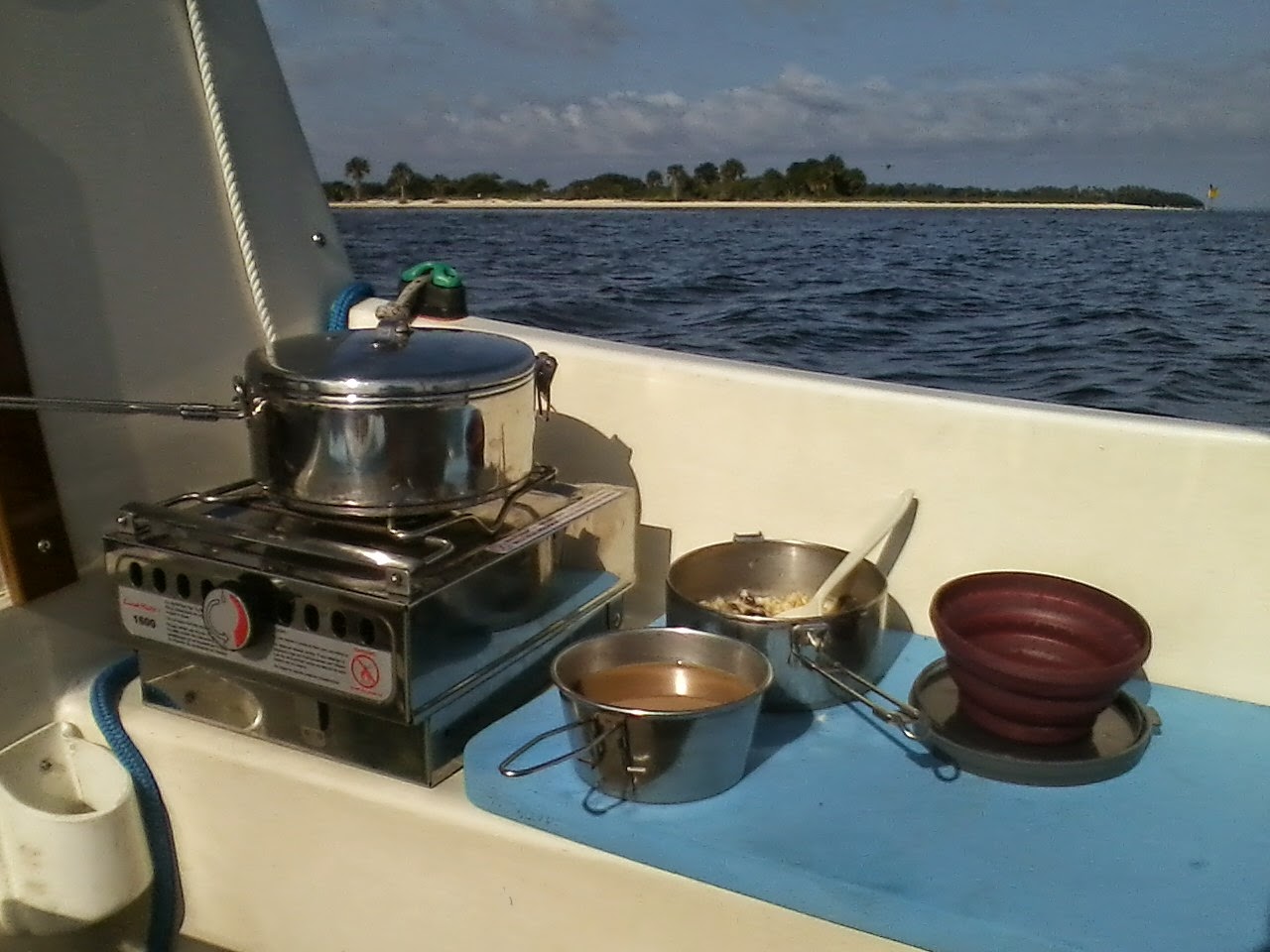 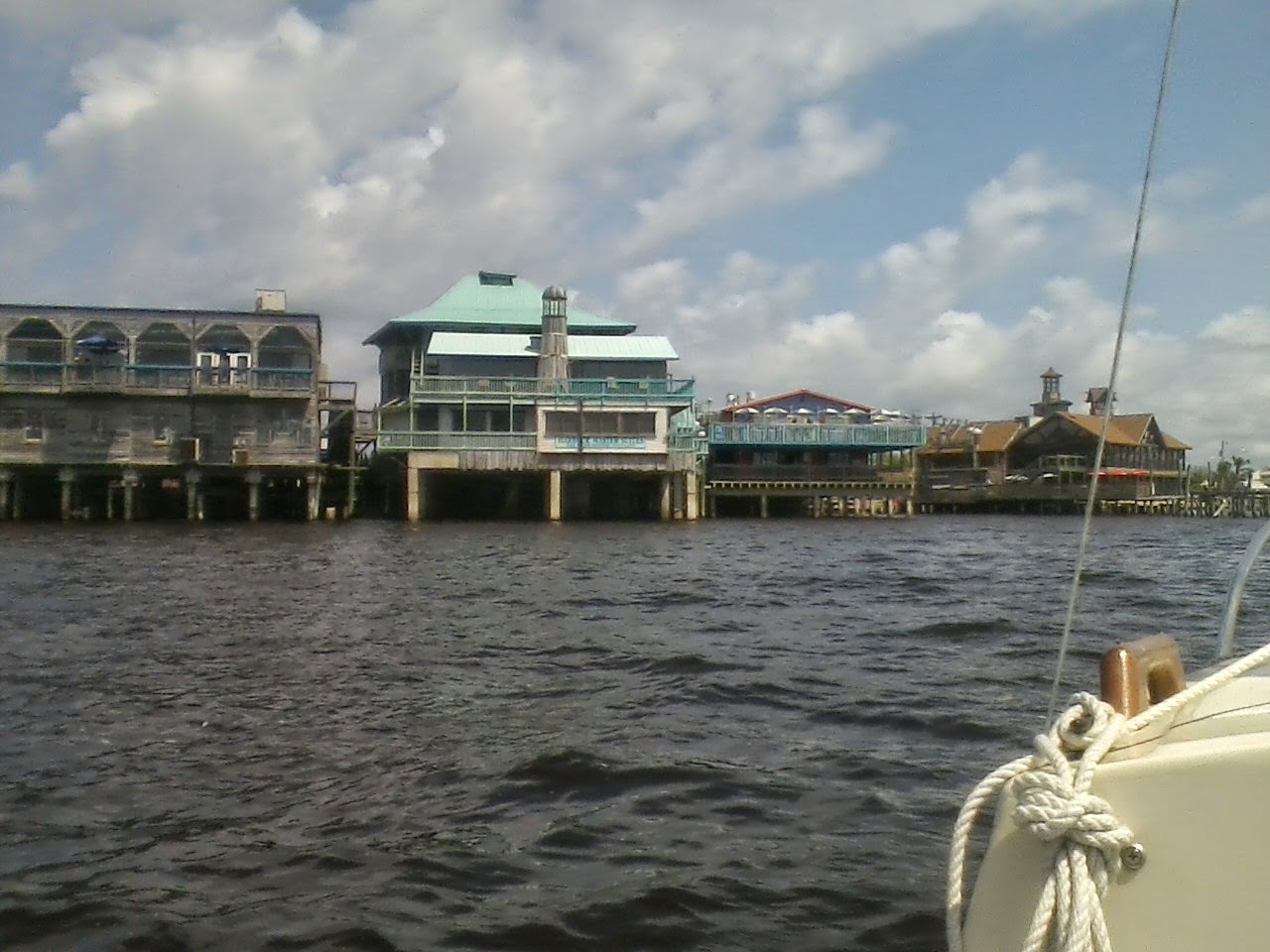 It was only about an hours drive to Crystal River and once at the site of the Fifth Annual Crystal River Boat Bash there was already activity. Dan had managed to get a crew spot aboard a cool little 14-foot Peep Hen with the assignment of towing out a fleet of Puddle Duck Racers.

Posted by Sunset Sailor John at 5:45 AM No comments:

It was 1981 and my wife and I were slowly working our way from Houston to the Florida Keys for the winter in our 23-foot twin-keel Westerly. As we were anchored off the city dock I heard someone calling my name. It was my mom, from Wisconsin, who had been looking for us at about every port along the Gulf Coast. You never know when mom will show up!
﻿ 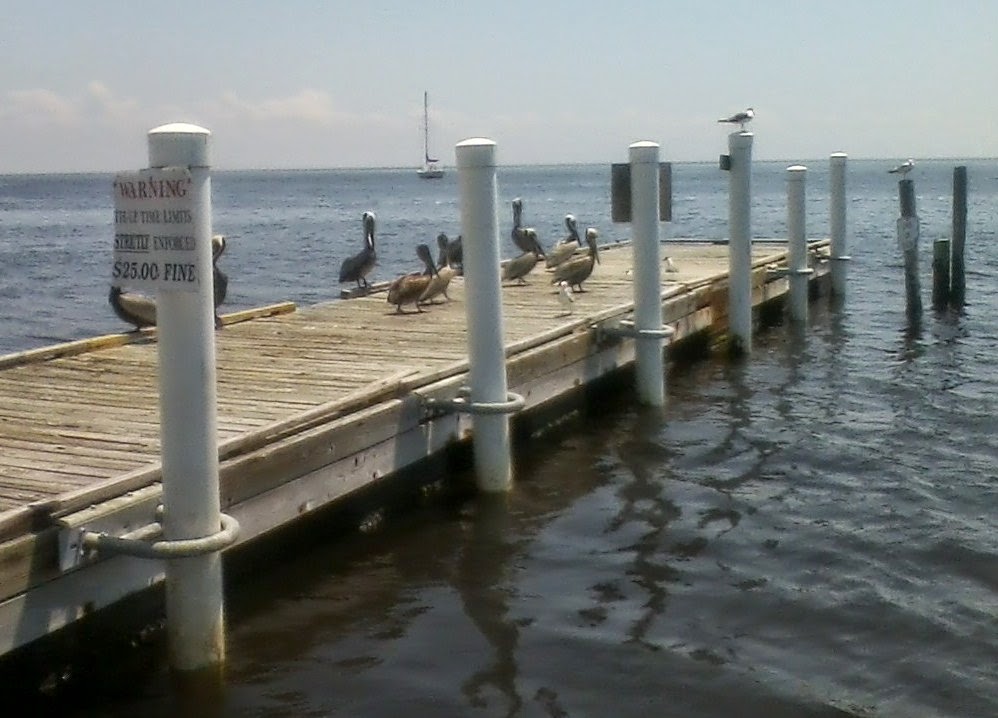 High on my bucket list for this trip was to explore some of the keys here. After buying a launch/parking permit (expiring in 24-hours) I set sail toward Seahorse Key for an overnight anchorage. Less than three miles from the launch ramp it still took me many tacks against a flood tide. Taking advantage of the Potter drawing even less than my Westerly I learned to tack just as the centerboard touched sand. 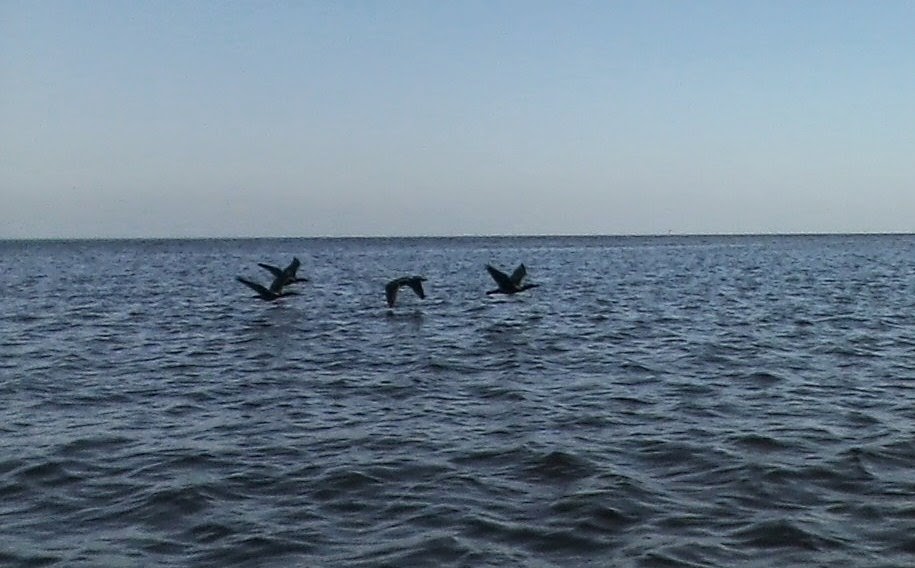 That didn’t work so well for a full-keel ketch, hard aground, that I came across. Next high tide was just after 11PM and this morning they are anchored safely nearby Hobbes. 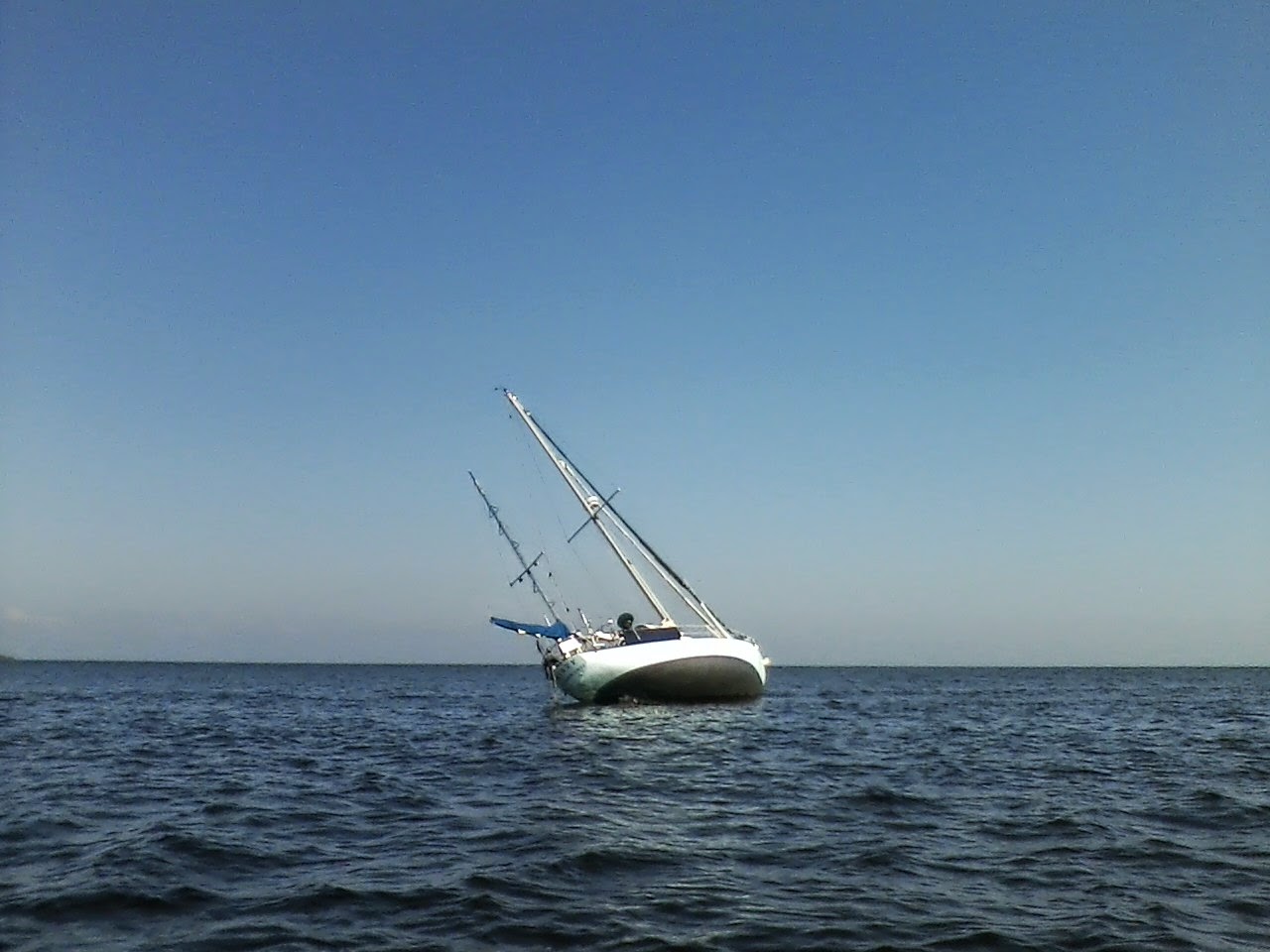 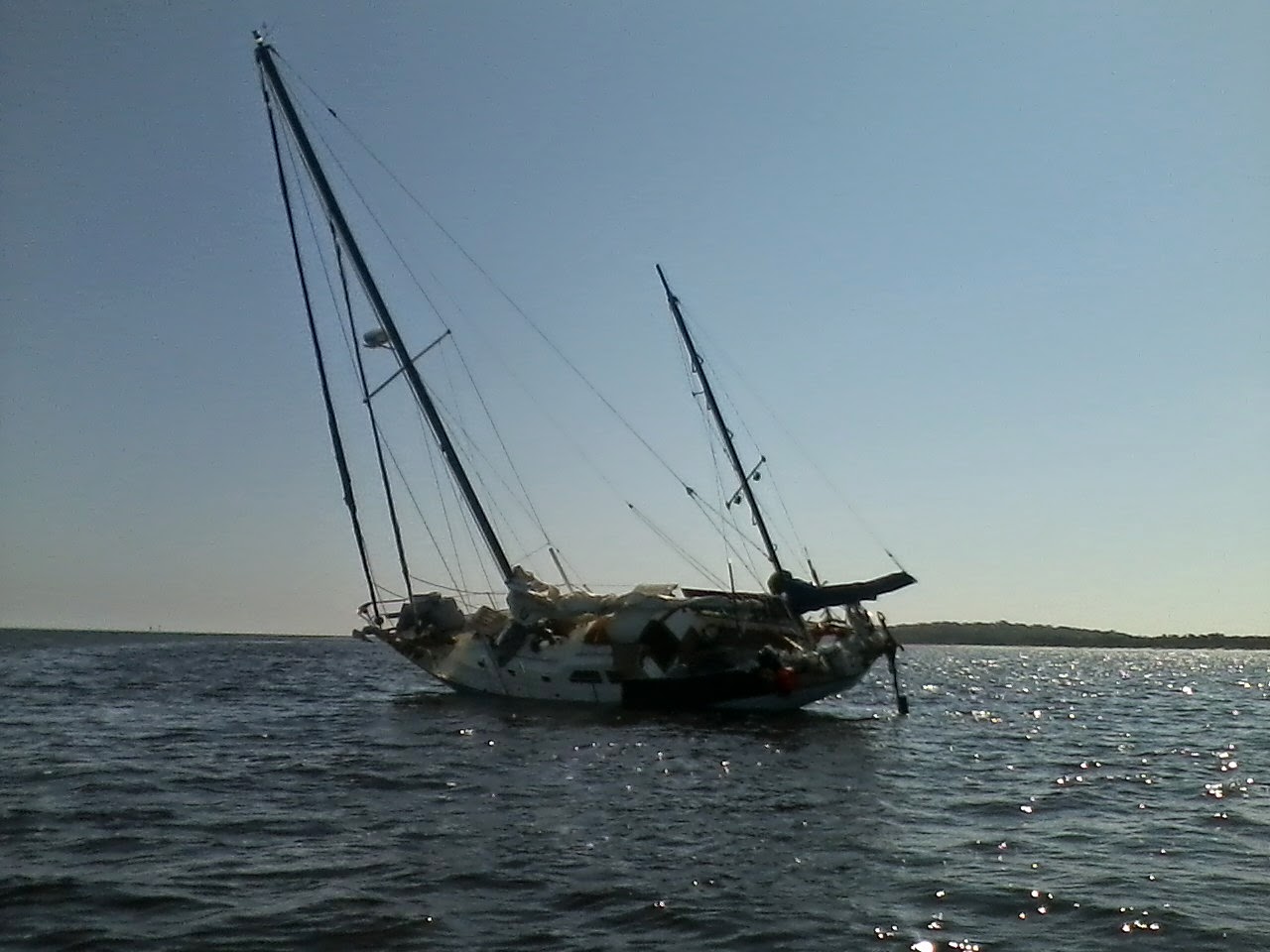 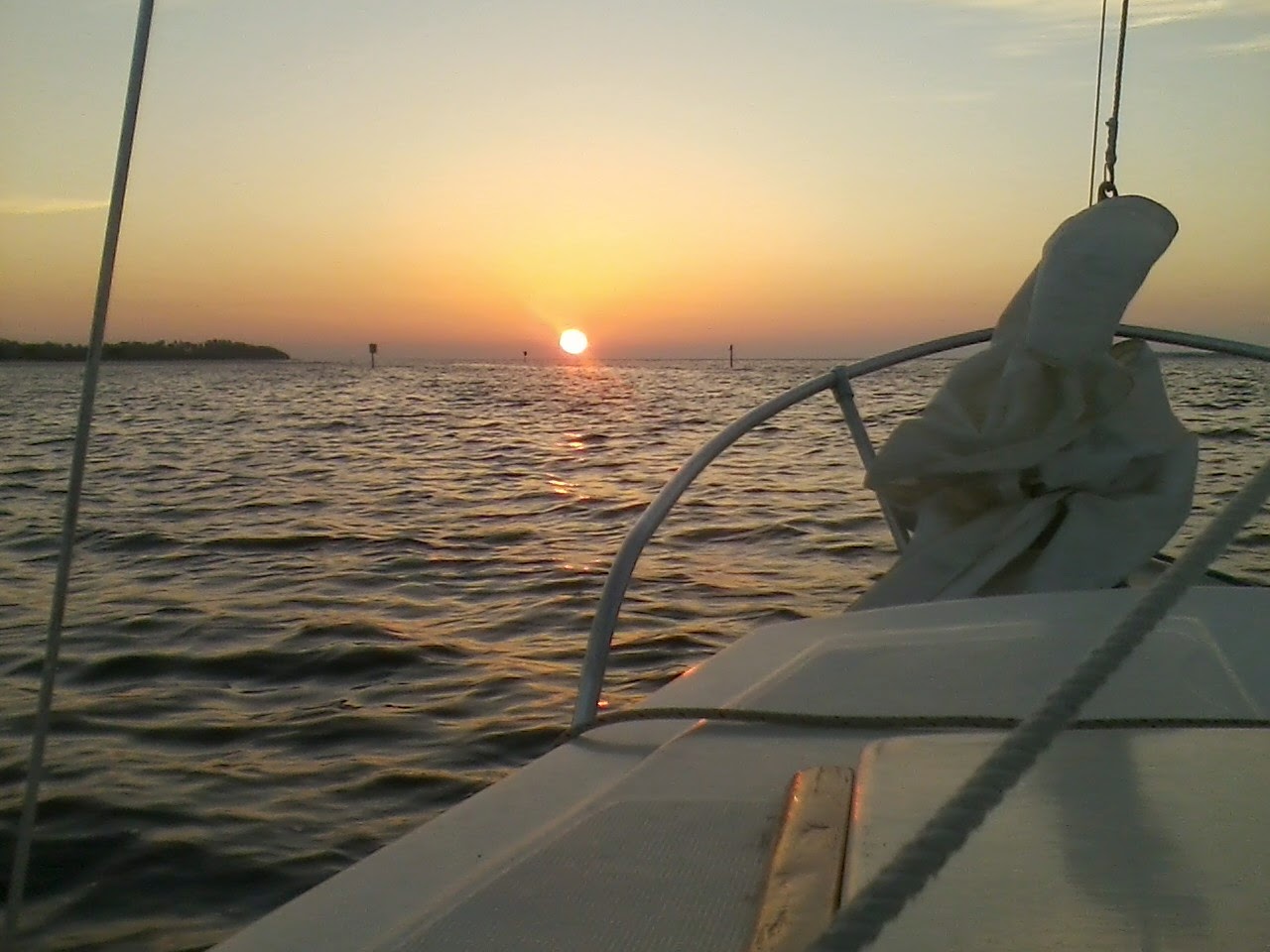 Posted by Sunset Sailor John at 5:29 AM No comments: